Mining and Business Magazine met with His Majesty the 8th MWAMI Mwenda Bantu Kaneranera Masuka Godefroid Munongo, King of the Bayeke. President of the National Alliance of Traditional Leaders, he is also Chairman of the Forum of African Kings and has been Senator for 12 years. During a long interview, he tells us about the work of his foundation and his vision for the DRC.

Mining & Business Magazine: Majesty, could you introduce yourself in a few words?

His Majesty Godefroid Munongo:  I am the Mwami of the Bayeke. Seventh successor of King Msiri I, who founded the Bayeke dynasty of Garengaze, and Senator since 2007, after having been a national and provincial Deputy. I have a degree in Economics and Political Science from North Eastern University in Boston and I am a director of several companies.

HMGM: Brasimba and Servair France in particular, where I sit on the Board  of Directors. We also have a gravel and rubble quarry.

M&B: How big is the Kingdom?

HMGM: The current surface area, inherited from colonisation, is about 30 thousand km2 or the size of Belgium. However, the Garengaze, named after the Empire, at the time of M’Siri’s heyday, around 1875, was as big as France, more than 640 thousand km2, because its boundaries stretched from Tabora, in northern Tanzania. With the Berlin Conference in 1885, we lost  all our brothers from Tanzania, under German rule, and Zambia, under British rule, but our capital city remains Bunkeya.

M&B: Are you still in contact with your Tanzanian brothers?

HMGM: They come every year and when it comes to inducting, I go to Zambia.

M&B: And to Tanzania too?

HMGM: Much less, because a law abolished pre-colonial monarchies under President Nyerere. He was a socialist and he put an end to that, but contacts remain.

M&B: You also have other functions, haven’t you?

HMGM: That’s right. I am the National President of the Republic’s traditional chiefs, grouped within the National Alliance of Traditional Leaders in Congo and, at the continental level, Chairman of the Kings of Africa.

M&B: What does the latter imply?

HMGM: In 2008, President Gaddafi invited about 1,500 kings and traditional chiefs to Benghazi to raise awareness about the African Union, the common flag, the common currency, the common army, the common passport. He had a fairly clear vision of the banking and financial systems to be put in place, in particular.

HMGM: Yes, and Gaddafi no longer being, other Kings have suggested that I perpetuate this project. I wasn’t in favour of this vision, but they still appointed me as chairman! My mandate ends this year, in December, and it is certainly the Ghanaian who will assume the role.

M&B: Is this role all about starting from the traditional to unify?

HMGM: To unify and have a common vision for peace and development with the African Union. I saw President Al Sissi last year, not knowing that he was going to become the chairman of the AU. I was also with Romano Prodi, the former Italian Prime Minister, who is our ambassador within the European Union.

M&B: What about the DRC and your relationships with the Republic?

HMGM: We already have a very good relationship with the new President and his Chief of Staff. We will help them according to their requests and needs. But, as I have always said: it is the patient who goes to the doctor. If the patient thinks he’s in good shape, we are not going to impose a treatment!

M&B: What is your main advocacy focus?

HMGM: First, the full application of decentralisation, so that all entities have an opportunity to develop. A very old proverb says: ‘kudia talala ikwabana biya’, which means: ‘To eat well, everyone must eat, even a little, but everyone must eat!’ Then, and above all, it is peace, peace and harmony among politicians. There has been far too much tension following the elections, cacophony and misunderstandings. The church has helped in its own way and so have we… But behind the scenes, because what we do is more effective when we are behind the scenes!

HMGM: Each chiefdom is a driving force behind the development of the decentralised territorial entity. We who are lucky enough to have miners such as TFM or Boss Mining in our chiefdom. We are entitled to mining royalties, and with that, we develop our entities. It is true that it started only 6 months ago, but we are starting to feel the effects of those royalties.

M&B: Is the mining royalty only 6 months old?

HMGM: Strangely it is! The concept was already introduced in the 2002 mining code, but it was never applied. A lot of gravity and centralization habits in Kinshasa! We had to fight for it for a long time and finally, in 2018, the miners were forced to release royalties…

We have already renovated the dormitories of our technical university in Bunkeya and Msiri University. Thanks to those royalties, we were also able to send 13 students to Cotonou to be trained in Songay, the largest agropastoral centre in West Africa.

M&B: How is this mining royalty managed?

HMGM: In the revised mining code, mining royalties amount to 15% for the chiefdom, 25% for the province and 45% for Kinshasa. The remaining 10% is for the Equalisation Fund. The money is managed through the chiefdom’s bank account with the Council. We have a council and an executive. I am only the authorising officer and they do the planning. They come to me and I approve!

M&B: So the principle of transparency is key!

HMGM: Yes! 70 people are on the Board. I have the last word, but they are the ones who do the feasibility study, present the projects. This now allows us to transform our chiefdom ‘pole pole’, as we say in Swahili, step by step.

M&B: What will be the main action carried out with this new fund?

HMGM: Education! Education with the Msiri 1st Technical University, of which my sister, Princess Mwansa Claude, is an administrator and member of the Council. This is our hobbyhorse! Next comes electricity, in order to develop small industries and drinking water with water wells equipped with solar panels.

M&B: Where does tourism fit in the whole picture?

HMGM: It is part of our action plan, but not our number one priority. We have already started tourism projects with the Governor of Lualaba and the Minister of Environment and Tourism, who came to see us regularly. We will slowly activate the machine…

M&B: Finally, a word about the senatorial elections?

HMGM: I am a senator from Lualaba, even though Lubudi is our territory. There are four of us. A system of respect for community balance was chosen: the Lunda, Tshokwe and Kaonde communities nominated a candidate. For the Bayekes, it was me. We did it in a non-partisan way, so it was much easier.

M&B: No need for envelopes, then!

HMGM: No… I am the patriarch and, unanimously, they said: ‘We will be supporting our father!’

M&B: Any message who wish to share with our readers?

HMGM: I would like to invite you to visit Bunkeya… So that you can see what we are trying to do, but also for you to advise us, guide us, to succeed in this great challenge.

HMGM: Thank you very much! 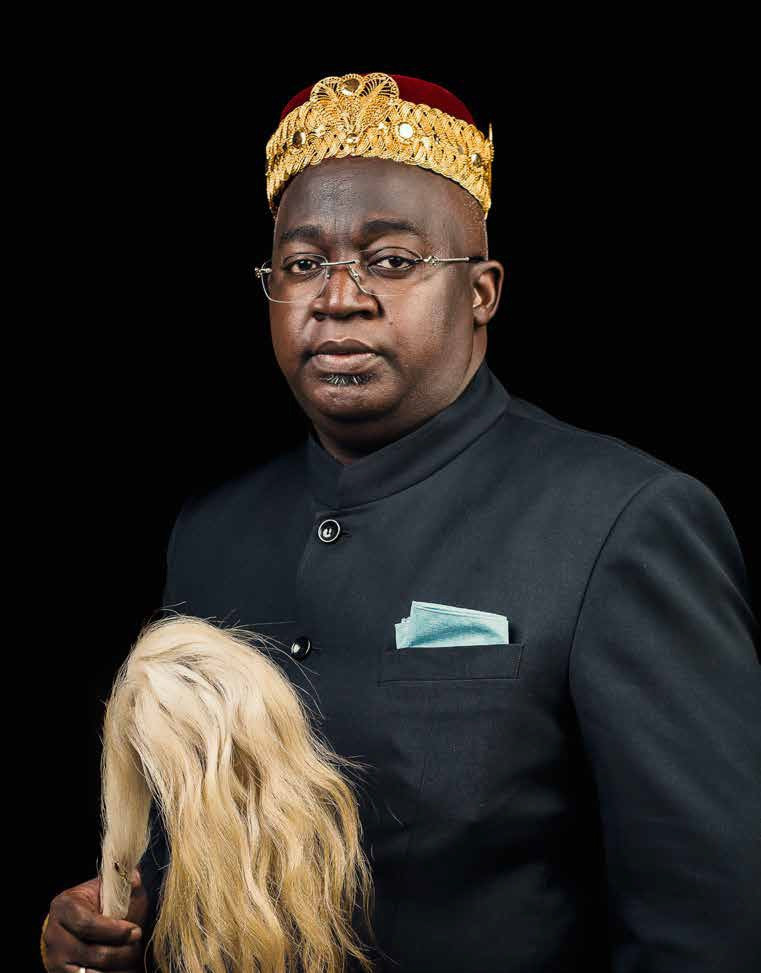