Editor-M&B
Admin
posted on 2 years ago
1,614
views
Interviews
A well-informed businesswoman, bubbling with energy, Nicole Sulu has become “Madame Makutano” in just a few years. ADG of the Sulu group, specialized in hotels and health, married, mother of two children, this “quadra” is at the head of the Sultani Makutano, the Congolese business club she created in 2015, and which she has managed since then. She shares her vision with M&B.

Mining & Business Magazine: Can you remind us in a few words what Makutano is?

Nicole Sulu : Makutano is above all a business network, i.e. a network that promotes exchanges between CEOs, investors, public decision-makers and all those directly involved at a high level in economic life. It is also a think tank, which makes strong proposals to address major economic issues. What we call a “Think and Do tank”. But its particularity lies in the fact that it is a network created by and for the Congolese... Which is very important.

N.S : African business networks generally reflect the reality of African economic ecosystems, which foreign investors, entrepreneurs also have a prominent place. This is logical given their weight in our economies. Makutano is not exclusive towards foreigners, but its DNA is Congolese and therefore African! And its primary objective is to give absolute priority to national companies with Congolese capital in order to work towards the reappropriation of the Congolese economy by nationals and, by extension, the African economy by Africans.

M&B : And how is this reappropriation done?

N.S: In many ways. Through capital, expertise and what I call the “know-how to be together.”

N.S: By strengthening its industrial champions, Africa will have more and more millionaire and even billionaire captains of industry. And it is these Africans who will create businesses and jobs, where the resulting wealth that remains in the country and drives the national economic machine. The Congo must create its own champions. The Makutano network is a collective force that leverages positive ambition.

N.S : As I was saying, Makutano offers strong proposals on all these subjects, but also increasingly in lobbying, in front of the decision-maker. In other words, as a pressure group to get things moving. The public decision-maker has an essential role in this regard. The law on subcontracting passed last year is a step in the right direction, and there are many other levers. These include facilitating access to credit at acceptable rates, regulating the capital market, reducing the tax burden or addressing the issue of porous borders, which creates so much unfair competition. I also believe that the economic roadmap  must be clearly defined by the authorities. The investor needs visibility to consolidate his projects...

M&B : What about expertise?

N.S : This is perhaps the main warhorse of the network, and our theme for last year, which was local content. We do suffer from a lack of qualified resources at almost all levels of the value chain, but this is not inevitable. Foreign companies investing in the DRC have the expertise and technologies they can, and even have a duty to, pass on here.

N.S : Yes, as part of their social and environmental responsibility, they have a clear mission to develop the country. And I also believe it is in their best interest! Companies that have an intensive policy of continuous training for their employees and that place national executives in management positions generally do much better than others...

M&B:  The third point was “knowing how to be together”, what do you mean by that?

N.S : Makutano was born from the observation that Congolese people struggle to work together and trust each other. On the other hand, there is community solidarity among foreigners living in the DRC. They support each other and do business together quite easily. The initial ambition of the network was to ensure that nationals meet, learn to trust each other, identify their skills and we have made great strides in this direction... It is nevertheless crazy that we go to Paris or Brussels to buy the service that a Congolese person offers on the opposite sidewalk, which he is just as capable of providing with the same requirements, and often for less money! 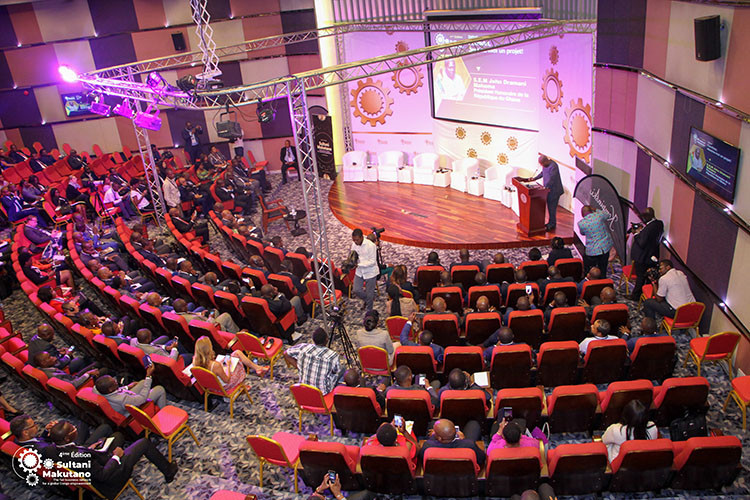 M&B : And how do you proceed, in practice?

N.S : Well, I think that’s where Makutano is different. Makutano is a special spirit, a new conviviality. We are quite far from formal high masses with soporific speeches... And that is what members appreciate. We feel that the network is intimately linked to this new generation of African CEOs who need a boost, who need to talk business and address the issues that make people angry, and who demand that things change! Makutano has become this space for exchange that was missing.

M&B : And what are the links with the public decision-maker?

N.S : The network is totally apolitical. Those who want to be in politics have places planned for that: it is called a party. Our strategy is to engage in a constructive dialogue with the decision-maker, trying to find the points of consensus before raising the points of disagreement. This state of mind is reassuring for our leaders and allows us to go quite far in the debates. A tacit non-aggression pact is also signed and waffle or public apologies are forbidden. It is important to note that we maintain dialogue throughout the year, and that Makutano is not just about one weekend a year.

M&B : Yes, this is one of the aspects of the network that is less known....

N.S : Indeed! However, we work from 1 January to 31 December. We organize conferences, thematic workshops, meetings in the territories, and we meet regularly to discuss specific themes. We also intermediate between foreign investors, international donors, chancelleries and Congolese CEOs.

M&B : What are the concrete, tangible results of these four years of Makutano, how many business projects?

N.S : We are often criticized for not being precise enough in answering this question, but the only objective result to give is, in my opinion, to have become one of the first business networks in Central Africa, and most certainly of the first business in Africa and most certainly in the DRC. It is clear that if we are now at the helm of the 200 active members and the 600 members or supporters, the vast majority of whom return to the forum every year... If the President of the Republic opens and closes this fifth edition... and if leading international personalities come to participate in our annual meetings... This means that participants find what they are looking for, that it benefits their business and that we therefore do our job! That being said, we know that the projects born from meetings during the Makutano are legion, but we cannot say how many. We encourage the meeting and our role ends there. What happens next does not concern us. This is obviously reflected in hundreds of business projects over the past four years and probably in thousands of jobs created or preserved.

N.S : For the past two years, we have been questioning what some call the “commodity curse” in an attempt to understand why our economies are so poorly diversified. With the 2019 theme, we focus on sectors that have been little or not explored to boost the economy, in the DRC or Africa. This ranges from “sport business” to green bonds, including contemporary art, sustainable energy and essential oils... But it also involves innovative financial levers, the creation of joint ventures to create national giants, the notion of State 2.0, etc. It is time to integrate the development logics of our countries into those of the century. In an era of globalization, artificial intelligence and energy transition, Africa needs to know where it wants to go, and how it intends to achieve this goal. This is what this forum is all about.

M&B : Will President Tshisekedi will open the debates?

N.S : Yes, and we are especially honoured. The President will also participate in the presidential closing, alongside other African Presidents. This time of exchange during which they will evoke their vision of this new Africa that we wish to build should be historic.

N.S : Yes, Xavier Niel, Samuel Eto’o, Tony Elumelu, Mustapha Sow, Walé Adéosun, Simon Tiemtoré, Giles Peppiatt, to name but a few, have also confirmed their attendance. I believe that the DRC is on the rise this year and that Makutano is the ideal place to do business there.

M&B : What about the next steps?

N.S : Strengthen our links with other African networks and take a delegation to a foreign country, Africa or elsewhere at least once a year. Better structure our thinking, with the support of experts, and propose duly documented roadmaps to public authorities.

N.S : I don’t think I have much to tell you that interests your readers (laughs)! You must have understood that this project is at the heart of my ambitions and that I am doing everything I can to ensure its success. It is what I am fighting for. And if I can, one day, tell myself that I have contributed a little bit to the development of this country that I love above all... I will have succeeded in my journey on this earth!