Editor-M&B
Admin
posted on 3 years ago
—
updated on 3 years ago
1,008
views
Copperbelt
From Australia to Chile, Indonesia to the Copperbelt, the pain of China's sharp economic slowdown is being felt in the form of depressed commodity prices, mines shutdowns and a resulting elevated unemployment.

As concern over the Asian giant’s slowdown continues to trigger a wave of emerging market turbulence, Zambia and the Congo find themselves at the centre of a storm.

For years, the two African countries were the continent’s main beneficiaries of a Chinese economy expanding at full tilt. With copper their key export, Beijing’s thirst for minerals helped the nations enjoy a decade of economic boom. Not any longer.

Despite being located 6,300 miles from the factories of southern China, their economies are being hit the hardest.

Zambia's currency, the kwacha, has dropped 53 per cent against the dollar this year, making it the worst performer globally out of the 155 currencies tracked by Bloomberg. A weak currency stokes inflation. So Zambia's central bank has raised its benchmark interest rate to 15.5 per cent — which will likely squeeze the economy just as it is weakening.

The country, which is Africa’s second biggest copper producer, depends on the red metal for about 70 per cent of its foreign exchange earnings and 25-30 per cent of government revenue.

But things are looking grim, especially since Glencore, an Anglo-Swiss commodities company and one of Zambia's main employers, announced it was cutting 4,000 jobs at the Mopani Copper Mine. The Konkola Copper Mine has already laid off 150 and is expected to cut more.

Another big investor, Chinese-owned company CNMC Limited, has suspended operations at the Baluba mine in Luanshya, laying off 1,600. The firm, as expected, blamed plummeting copper prices for the drastic move.

The country’s situation highlights the vulnerability of Africa’s resource-dependent nations to the fortunes of China. The timing could not be worse for Zambia, with the turbulence coinciding with severe power shortages and political uncertainty ahead of elections next year — the country’s second poll in 18 months.

The Democratic Republic of Congo, Africa's top copper producer, has experienced a similar, if not worse, debacle.

Recent figures released by the country’s Chamber of Mines show that production slumped 8.2 percent year on year in the third quarter due mainly to weak metal prices and power shortages.

Electricity deficits have forced Congolese operators to rely on expensive imports from neighbouring Zambia, which has hit by its own power problems, or even costlier generators.

While the nation surpassed 1 million tonnes of output in 2014 for the first time in its history last year, the chamber expects that figure to dip by five percent to about 980,000 tonnes this year.

Glencore's Katanga Mining unit suspended copper and cobalt production at one of its mines in September for 18 months. Here too the mining giant cited low copper prices and a need to reduce operating costs as the main reasons for such move.

According to official estimates, the suspension will cost the Treasury about 200 billion francs in lost revenue next year, as the mine accounted for 15 percent of Congo's copper output last year.

Some argue the sudden and progressive loss of a major external metal buyer, namely China, is the wake up Africa needs. The continent, they say, would do well to look within, as its one billion plus population is a vast market that can be a powerful engine for growth.

So far, there have been several bottlenecks that have caused intra-African to fail taking off in a meaningful manner.

Regional integration and the removal of barriers obstructing trade within Africa would need to be implemented with a view towards creating sustainably diversified economies that will not suffer the caprices of reliance on one large trade partner, as they do now.

Recent data shows that intra-African trade stands at a mere 12% of countries’ total trade. By comparison, 60% of Europe’s trade is within itself and so is the case with Asia and even North America. Intra-African trade would present a good opportunity for most African countries to make the necessary structural changes in a focused move towards creating more diverse economies.

These reforms are necessary in ensuring that Africa’s growth story progresses unchecked, in consideration of its fast growing and youthful population.

For now however, as China’s economic “hard landing” continues to unfold, the turbulence this has created in Africa, particularly trough the copper belt, will continue, as these nations are heavily dependent on China trade. The situation in China, which accounts for more than 40 per cent of the metal’s global consumption, will likely get worse before it gets better, although Beijing insists that the worst is over.

Copper prices, however, continue decline. They have tumbled 27% this year on signs of slower economic growth in China, the world’s top copper buyer. In early November the metal dropped to a six-year low of less than $4,600 per tonne on fears that China’s economy could slow further.

Meanwhile, the International Copper Study Group, an industry association, said the global copper market reached a supply surplus of 81,000 metric tons in August, and a 69,000 metric ton surplus for the January-to-August period.

On top of those predictions, a China-owned copper producer said this month it is planning 200,000 tonnes of new capacity in Shandong province, illustrating how Beijing's policy to protect jobs and manufacturing may collide with efforts by producers like Glencore and Freeport McMoRan Inc. to curb output and erode the surplus.

China’s recent slowdown has left several casualties across the globe. Here are some of them:

In the Aussie mining town of Port Hedland, 1,500km north of Perth, modest prefabricated homes called fibro shacks, which were changing hands for more than A$1m four years ago, are now failing to find a buyer at a third of the price.

This as iron ore prices have touched historic lows, falling from a peak of $185 per metric ton in 2011 to below $60. And Australia produces a third of the world's iron ore.

The nation’s unemployment rate, at 6.2 per cent, far exceeds the U.S. rate of 5 per cent. And the Australian dollar has fallen 14 per cent against the dollar this year.

As Australia, Canada exports of natural resources – including oil and iron ore –  to China have collapsed this year.

The country’s exports to China, mainly coal and copper, have dropped 21 per cent through September, forcing more than 120 coal mining companies to halt operations, and putting 5,000 miners out of work.

The IMF forecast that Indonesia's economy this year will post its weakest growth since 2002 — a mere 4.7 per cent.

Together with Zambia, the South American nation has been the most affected by China's troubles. Despite being the world's top copper producer, its economy grew just 1.9 per cent last year, the weakest since 2009. As China's demand dropped, the price of copper went into free-fall — to a six-year low $2.25 a pound. The state-owned miner Codelco has reduced or delayed projects, including the expansion of its main Andina mine and a plan to turn the world's largest open-pit mine into an underground operation.

Foreign miners are laying off workers. In September, US-based Freeport-McMoran, let go more than 640 workers at its El Abra copper mine in northern Chile. 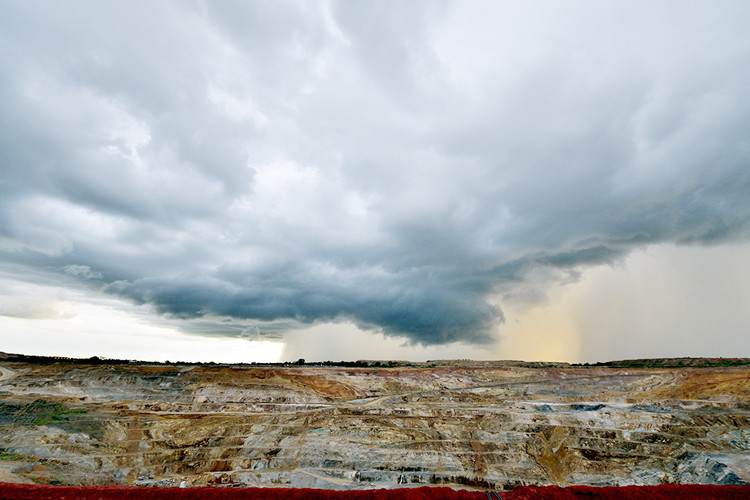