Tuesday, Total stated it had sold one million solar lamps throughout Sub-Saharan Africa and Asia under its Awango programme launched late 2012. The French oil giant is aiming to sell five million lamps by 2020. 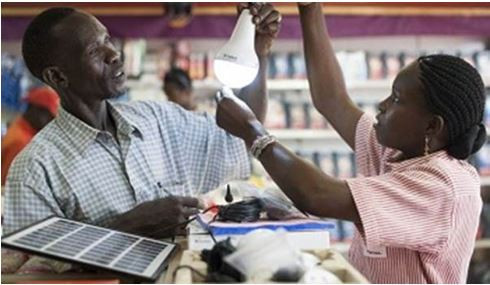 Tuesday, Total stated it had sold one million solar lamps throughout Sub-Saharan Africa and Asia under its Awango programme launched late 2012. The French oil giant is aiming to sell five million lamps by 2020.

According to Total’s estimates, five million people have access to electricity thanks to its Awango solar lamp

Speaking to a panel of journalists in May, Total group outlined the details its Awango programme, developed by the “Total Access to Energy” incubator. Programme director Christophe Dargnies, was delighted with the success of the lamps. One million have been sold since the programme was launched in 2012, mainly in Sub-Saharan Africa but also in Asia.

The French group feels it has achieved its goal of “improving the daily lives of five million people before 2015”, with one lamp providing light to an entire family, but doesn’t want to stop there. “Our goal is to continue to develop the programme with a target of five million lamps sold by 2020 that will reach 25 million people across the continent’, declared Patrick Pouyanné, Total CEO, in a press release following the presentation.

Designed for homes without power, Awango by Total lamps are powered by a small solar panel and guaranteed for two years. They can also be used to charge small appliances. The lamps are built by suppliers based in Asia in collaboration with Total. The oil group handles marketing and distribution drawing on its network of petrol stations in certain countries and partnerships with private retailers and NGOs for remoter areas. “It is financially viable for all those involved in the supply chain”, assures Christophe Dargnies.

The lamps cost between “12 and 20 dollars” depending on the model and where it is sold the director of Total’s incubator explains. “This is a considerable investment for people who earn less than a dollar a day”, he acknowledges. But savings made on kerosene these households would have to buy to light their homes can offset the cost of the lamp.

“Total is looking into microcredit funding solutions to help households access these lamps”, added Christophe Dargnies. “Total Access to Energy” also wants to expand its product line with self-powered household appliances. “The idea is to create appliances made up of units so that they can be self-powered and affordable,” the programme director explains. Solar panels could then be connected to the lamps. Total’s incubator, which receives all the profit from the sale of Awango lamps, is working on an upgraded oven installed with a ventilator.