Hugh Masekela the trumpet of freedom

Editor-M&B
Admin
posted on 3 years ago
—
updated on 3 years ago
1,365
views
News
He was a legend. Pioneer of Afro-jazz, the South African trumpet player and anti-apartheid activist, died on Tuesday 23 January 2018 at the age of 78 in Johannesburg.

South African President Jacob Zuma stated he was "a jazz artist, legendary trumpet player, cultural advocate and veteran of the liberation struggle" against apartheid. "He kept the flame of freedom alive by fighting against apartheid with his music,"Zuma.

He was the pioneer of Afro-jazz and a symbol of the struggle against apartheid, such as his ex-wife Miriam Makeba, his compatriot in exile whom he married in New York in 1964, or the pianist Abdullah Ibrahim with whom he collaborated extensively. Hugh Masekela is inseparable from South African history.

Born in 1932 in the township of Kwa-Guga near Johannesburg, Masekela had the vision of his future vocation as a trumpet player at the age of 14 when in a local cinema he watched the film 'Young Man With A Horn' on the life of jazzman Bix Beiderbecke, starring Kirk Douglas. He learned the piano before being offered a trumpet by Archbishop Trevor Huddleston. "I took it and felt like a fish in the water," he said. His connection with the pop world will continue over the years. He played with the master of Afrobeat, Nigerian Fela Kuti, and participated in 1974 in the organisation of the festival ahead of the historic boxing duel between Mohamed Ali and George Foreman in Kinshasa in the Democratic Republic of Congo.

Composer and singer Masekela fled apartheid in the early 1960s and went into exile in Great Britain and the United States. Protected by Harry Belafonte, Miles Davis or Dizzy Gillespie he also collaborated with musicians Paul Simon and Herb Alpert. He released his first album Trumpet Africa in 1962 and soon integrated his South African roots into his jazz career, as in the song Mbaqanga on his second album Grrr released in 1965.

In the 1980s, he built a mobile recording studio in Botswana and toured with Paul Simon on the famous album "Graceland".

Back home after the fall of apartheid, Masekela continues to make his voice heard on stage and in politics. "It is safe to say that Brother Hugh was one of the great architects of Afro-jazz and that he raised the soul of our nation through his timeless music," added President Zuma.

Several of Hugh Masekela's compositions have evoked the anti-apartheid struggles of the black majority in South Africa. His play, 'Bring Him Back Hom' served as the anthem for the release of South African activist Nelson Mandela. 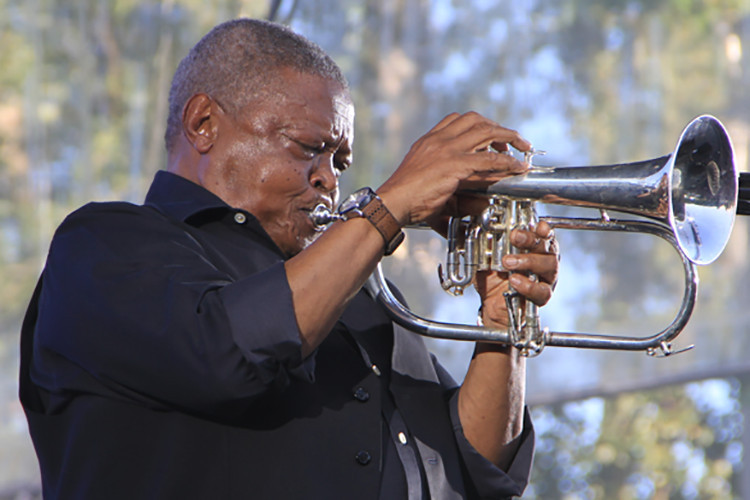