Editor-M&B
Admin
posted on 2 years ago
—
updated on 2 years ago
853
views
News
Over four hundred economic actors, about ten ministers, a fine group of international guests, a B2B day in Brazzaville between business leaders from the two Congos and a day of rather successful debates at the Kempinsky. In other words: a great success for this fourth edition of Sultani Makutano, on 15 and 17 September.

The Makutano website displayed “Sold out” (750 USD the entrance ticket) eight days prior to the start of the event. That said, two things must be remembered. On the one hand, the capitalization was well done in previous years and the business network was able to bring together a whole generation of business leaders. Enthusiasm that is also related to a rather sexy 2018 menu, with a very trendy theme, “Local Content”, and the departure of 250 DRCongolese business leaders to Brazzaville for a B2B day.

THE B2B MEETING IN BRAZZA, SEPTEMBER 15

Believe it or not, it was the first time that a delegation of DRC business leaders went to Brazzaville to “identify business opportunities”. A delegation of about 100 people was waiting for them on the other side of the river, led by Paul Obambi, boss of the bosses of Congo B. and a strong figure of local entrepreneurship. In plenary, at the Radisson Hotel, “How to boost economic dynamics between the two countries” raised the theme of the meeting.

While the “lack of political will” has been identified as a “major obstacle”, it has been acknowledged that “this reluctance cannot be verified in the informal context” and that it would therefore be “appropriate to propose administrative measures to reverse the trend”. Similarly, the idea of “joining forces in certain sectors in order not to compete internationally” was considered as a basis for further reflection. We should also note the fiery plea of the Minister of the Environment in Congo B. for “joint actions to enhance our common natural heritage and make it a centre of sustainable economic excellence”.

A business lunch and a “speed business dating” then allowed the CEOs from both countries to get to know each other before returning to Kinshasa in the evening.

In short, the expectations of the private sector are there, and this “psychological rather than technical or political brake” is tending to disappear. A disappointment on the part of Kinshasa’s bosses; too little networking opportunities with Brazzaville companies.

The experts discussed it with passion at the Kempinsky, in Kinshasa, for hours and the fact is that the implementation of a real Local Content policy “aimed at promoting the transformation of raw materials as close as possible to their production site by local actors” supposes an aggregate of preconditions.

It is clear from the exchanges, opened by Albert Yuma’s passionate speech on “the need for a radical paradigm shift in the face of raw materials” and pleading for the “implementation of an educational policy in step with the times”, that the training of young people, “a sine qua non condition for resituating them in a project for the future”, is the basis for this.

“The urgent need to diversify the economy and to embrace sustainable development approaches” has also become a pillar of Local Content.

Among the VIPs attending the event, President Mahama of Ghana warned, however, of the “danger of a nationalist withdrawal” if we want “to see one day a united economic Africa”, and of the “need to understand the notion of Local Content in its continental dimension”. Justin Chinyanta and Vincent le Guennou, both CEOs of Private Equity international firms, called for the “establishment of sovereign funds secured by States, but autonomous and managed by the private sector” in order to “ensure that a part of the profits made today from mineral commodities go to future generations” and “protect economies from exogenous shocks”.

In conclusion, we will mention the delicious debate led at the end of the day by Alain Foka, and broadcast on RFI the following Sunday, during which some economic and political leaders drew the ideal portrait of their future President of the Republic. To be enjoyed as a podcast. 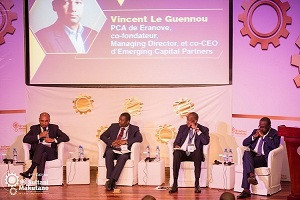