EU: “Blood Minerals” back on the parliamentary agenda

Editor-M&B
Admin
posted on 2 years ago
—
updated on 2 years ago
811
views
“Blood minerals” are extracted during armed conflicts or in cases of human rights violations, particularly in eastern provinces of the Democratic Republic of the Congo.

The Congo, Rwanda, Uganda and Burundi have drawn huge profits from their neighbour’s resources during periods of conflict. The most extracted minerals are cassiterite, wolframite, coltan and gold. These travel through eastern Congo via various intermediaries before being sold to multinationals in the electronic sector. They are mostly used in tablets, cellphones and computers. Since 2003, the European Commission has been one of the main aid donors in the Congo, mostly in the unstable eastern region. According to the EU’s Country Strategy Paper for 2008-2013 period, published within the context of the 10th European Development Fund of, some €583 million have been pledged to the Congo under DG Humanitarian Aid and Civil Protection. Initially rejected by the parliamentary commission, the adoption of a mechanism restricting the procurement of certain resources from regions of conflict could make a discreet re-entry when the bill is voted on 20 May. The European Parliament is to decide on regulations to limit the trade of gold, tantalum (materials found in cellphones to make them vibrate), tungsten and tin that finance armed conflict. There is a European Commission draft proposal for regulation on the trade of these “blood minerals” from conflict zones, which they usually finances The draft initially aimed to adopt a responsible sourcing method of metals from conflict zones in general, and from the Great Lakes region in the DRC, where this phenomenon is particularly prevalent. However, left-wing political forces and NGOs have heavily criticised the draft for its lack of ambition. On 20 May in Strasbourg, the Members of the European Parliament (MEP) will have to vote the adoption of the in the first reading. This is yet another occasion for the MEPs to secure a  binding transparent regulation across the entire supply chain. Granted, it will replace the self-certification proposed by the initial text. In April, a small minority within the Committee on International Trade of the European Parliament once again  rejected a proposal to impose binding transparency on the entire supply chain of “blood minerals”

“The European Union imports a significant amount of raw materials from conflict zones. Through their supply chains, some European companies are complicit in crimes. This cannot carry on any longer. We have to put in place a mandatory procedure. We want mandatory responsibility and traceability for all products (cellphones, tablets, computers, washing machines…) from the production site to the end distributor“, repeated the French socialist delegation to the European Parliament. For now, the European regulation only imposes the few European foundries and refineries the obligation to ensure responsible supply, representing only 5% of global trade.

Due diligence for responsible supply

This due diligence for responsible supply will only affect a share of the market: that of raw materials directly imported from the conflict zones by European foundries. This will leave manufactured products containing those same minerals and raw materials transiting via other zones, like Asia for instance, in the grip of self-certification. “The application of the due diligence does not mean that commercial trades with the conflict zones must stop, but only that there is an obligation to ensure that the authors of those conflicts do not reap the benefits of this trade”, added Nele Meyer from Amnesty International.

Another drawback of the text is that, at present, it only concerns four minerals: gold, tantalum, tungsten and tin. “Today, the widening of the regulation field to another minerals seems complicated, notably in terms of charges incurred by businesses,” Nele Mayer admitted. The idea is then to have an amendment adopted that could allow the addition of certain minerals in the future without having to go through the whole legislative procedure again. An option that could allow the inclusion of other minerals supplying armed conflict on a case-by-case basis, such as emeralds and coal in Colombia, or copper, jade and rubies in Burma.

While parliament debates about the pertinence of a binding method in the United-States, a very critical report from the NGO Global Witness and Amnesty International was recently published on the Dodd-Franck Act that makes in mandatory for American companies to scrupulously verify the origin of their minerals. Presented as a kind of model, the Dodd-Franck Act has not succeeded in improving the behaviour of the biggest American companies, despite its binding nature. Among the 100 companies examined by Global Witness, 79 do not meet the American law’s minimum requirement on conflict minerals. Besides, only 16% have further investigated their direct suppliers “to get in contact or attempt to get in contact with the foundries or the refineries that process these minerals”, highlighted the report. 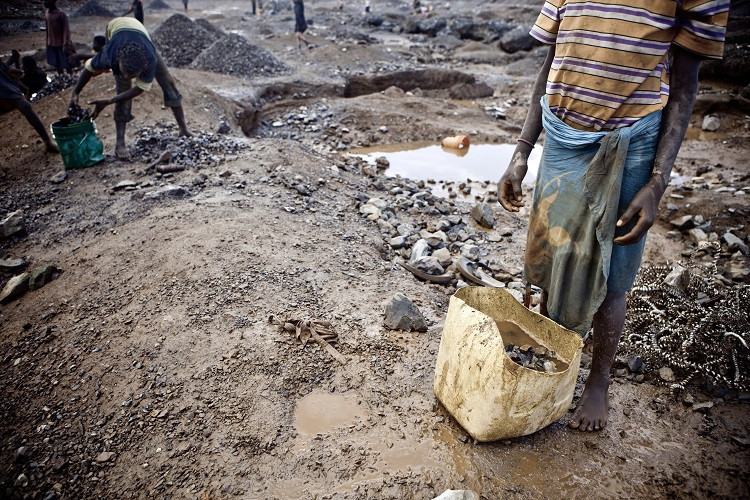