"Makala", filmed in the DRC near Kolwezi, won the Grand Prix de la Semaine de la Critique in Cannes in May 2017. This documentary directed by the French film director Emmanuel Gras follows a Congolese villager going to the city to sell his makala, armed only with his iron will.

"Makala", filmed in the DRC near Kolwezi, won the Grand Prix de la Semaine de la Critique in Cannes in May 2017. This documentary directed by the French film director Emmanuel Gras follows a Congolese villager going to the city to sell his makala, armed only with his iron will. Camera on his shoulder, the director depicts his activity as a lumberjack, a salesman, passing through this precarious status of ‘carrier’ on his ‘4X4 bicycle’.

At the heart of the debate on the energy transition and deforestation of Congo, Makala is a powerful, sensitive and above all an unmissable film.

M&B: Emmanuel, what was your intention when filming Kabwita Kasongo's journey?

EG: When questioning charcoal manufacturers, I was struck by the huge gap between the energy and effort expended to produce and transport their goods and the low economic value of this makala. By following him from beginning to end, from cutting the tree to selling the coal, that's what I wanted to show first: for them, you have to do a lot to harvest little. I had already filmed diggers for a Belgian documentary ‘Pale Peko Bantu’, and we found the same ingredients: risk-taking, exhausting physical work and little counterpart. It's dramatic, but it says a lot.

During the film, another problem emerged: the price difference between local products, with which some Congolese survive, and imported manufactured products. I don't know where the corrugated sheets come from, but when you see their price, you understand that it is challenging for a farmer to improve his life with the fruit of his labour.

M&B: What happened to your ‘actor’ after the movie was released?

EG: I promised to give him enough to build his house, and that's what I did. I also left him a mobile phone, so we could stay in touch, and Gaston Mushid my assistant director (who is also director of RTM) went back to the village to show him the film. He and his family are well, and he lives in his new house, which is no more luxurious than the old one but belongs to him. He continues to cultivate his plot and produces coal. I look forward to the screening in the village to meet him again!

MB: Do you have a feedback from the Congolese government since the release?

MB: Will you organise a screening in the DRC?

EG: A tour is organized by the French Institutes. So there will be screenings in Kinshasa, Lubumbashi, Kolwezi and perhaps other cities. There will also be screenings at the Lubumbashi Museum, in villages and places located outside city centres.

MB: Do you have other projects that will help make a difference in the DRC?

EG: Not immediately, but I regret that my film does not show more clearly that the need for coal comes from the lack of other energy sources for households. No electricity, even less gas... It is this shortage that causes deforestation. If I had to make a new film, it would be focusing on this gap.

MB: What message did you try to get across by showing this ‘awakened church’ where curiously the preaching is about men of integrity?

EG: It was while editing the film that I realised that the preaching was about men of integrity. At first I thought it was a happy coincidence, but in fact, I think Job's story is often mentioned by preachers to reach the Congolese worshippers, who often face problems of corruption.

I kept this scene because these churches are very present in Congo and I thought it was right to make them exist. Then, showing this place where people meet to express their sorrows and their hopes in the hope of being listened seemed essential to me. There's something very human about it. But there is a return to reality after this intense moment. I didn't want to judge him: we can see this scene as a way for Kabwita to regain energy... or merely a new illusion.

Kabwita produces charcoal and sells it in Kolwezi, about 40 km from his village. The documentary film invites us to follow the villager’s exhausting and dangerous work, from cutting down a tree and turning it into charcoal, then loading the twelve bags (200 kilos) on his ‘4x4 bicycle’, pushed on 40 km of tracks for three days, to make a derisory income, even compared to his modest dreams.

Kabwita's road is full of obstacles. His hopes are put in difficulty in the teeming and dusty city where he has to haggle over the bag for between 3,000 and 4,500 francs each time, while a simple corrugated sheet for the roof of his house costs 11,500 francs!

The young man’s physical wear and tear (even though he has not reached his thirties), corruption, the individualistic logic that has prevailed over ancestral solidarities, rudimentary techniques, the rarity of stoves and the electrical problems that make it essential for everyone to buy a product at the lowest price, including the town's notables, are meticulously explored.

Thus, ‘Makala’ refers us to the problem of wood energy, known as ‘poor people's oil’ in the face of galloping household energy demand.

As the rest of the world begins to build more energy-efficient societies that are less dependent on fossil fuels, tons of charcoal and firewood are being shipped into DRC markets without meeting ecological standards, thus reducing forest biodiversity. Kabwita and his counterparts participate into this tragedy, of course, but finally appear as heroes of daily life, seeking comfort in the ‘awakened churches’.

Throughout the film, Emmanuel Gras is there, invisible, beside his ‘actor’, filming him in his work and quest with infinite respect. Makala is not a ‘miserabilistic’ movie. It reminds us what the dignity of a man living with this fierce determination oscillating between strength of character and resignation is.

It is a film of both infinite beauty and infinite sadness. Kabwita is not a fictional character, but a person, among thousands of others.

No morality, no details, no explanations: we touch its reality, no matter how hard it may be. 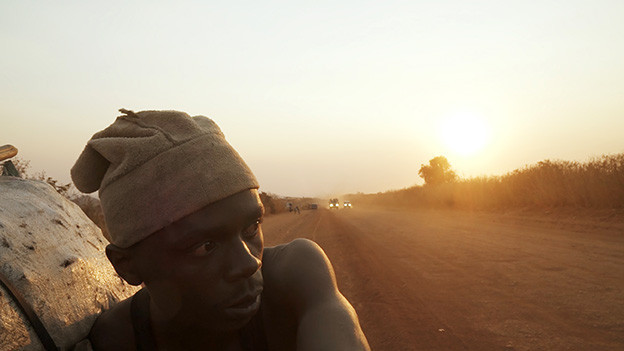