By reservation, you will discover a breath-taking private palace where your curiosity will uncover a crocodile mummy preserved in a beautiful setting and much more; A private library, a chocolate house, an alchemical ceiling in Schönbrunn, one of the most beautiful pharmacies in the world if experienced exceptional.

A superb Art nouveau church, a jazz museum in public toilets, an open public dump that can be visited like a museum, an empress in a nun's clothes, the mystery of the 05 symbol, a masculine sex carved discreetly on the facade of Vienna’s cathedral, an incredible bouquet where each flower is made up of several butterfly wings, a water fountain that allows one to see the lottery numbers for one minute, an extraordinary underground annex of the Mauthausen camp where the world's first jet plane was built, a historical "love hotel" of great charm...

Far from the usual crowds and clichés, Vienna still keeps its treasures well-hidden and only reveals them to the inhabitants and curious travellers who know how to go off the beaten track.

FRESCO OF THE COW PLAYING TRICTRAC

The memory of a love story

At 12 Bäckerstraße, the facade of this bourgeois house is decorated with an astonishing fresco which could be described as 'a cow with glasses and a fox (or a wolf?) who plays a game of trictrac (a game played on a board similar to that of the backgammon).

According to legend, a Viennese judge named Hieronymus Kuh (Kuh means cow in German), who occupied this house, was playing regular trictrac with one of his acquaintances, a man named Hans Kagelwidt, who served as Councillor to the Duke, Rudolf IV. Hieronymus Kuh's daughter was named Trude and always welcomed Mr Kagelwidt when he visited his father. One day, Kagelwidt asked for her hand. She immediately accepted and wished to have the house baptised as an engagement present. As no appropriate name came to her mind, the girl suggested that her father and her fiancé name the house according to the famous trictrac game. A painter charged with the task of completing the order, and so the building became ‘the house where a cow plays trictrac’. The formerly modern binocle worn by the cow would have ideally suited an old man. All that remains to do was to elucidate the presence of the second animal. Did the descendants of the young couple assimilate their ancestor to a wolf or a fox?

It was not easy to find one's way around Vienna during the first half of the 18th century. The numbering of the buildings just began to spread, but most importantly, few people were able to read or write. Paintings on building facades or small wooden panels nevertheless made it possible to obtain some indications of who the occupants were, or what shops and services or goods were offered. Thus, a building could bear the name of "Where the wolf preaches to the geese" or "Where one quenches his thirst". The renovation of the building in 1978 made it possible to shine the light on this original fresco. If in Vienna alone only a few buildings have retained visible evidence of their belonging to the Gothic period, here one distinguishes the authentic Gothic style of the entrance as well as a small portal with a typical warhead arch just below the fresco.

STATUE OF A TURKISH RIDER

The location of Kara Mustafa's camp?

At the corner of Neustiftgasse and Kellermanngasse, a statue in gilded stone depicting a Turkish rider protected by a metal fence. The inscription underneath clearly indicates this is the location presumed from the camp of the grand Ottoman vizier Kara Mustafa. According to the tale, during the siege of Vienna by the Turks in 1683, Kara Mustafa had an impressive canvas castle built in 1683 in this neighbourhood. The palace was located much more to the west of the city at the time of the war, at a respectable distance from the battlefield. The headquarters, placed directly under the command of the great vizier, was nevertheless built in the 7th arrondissement, on the left bank of Ottakring river. According to Turkish sources, Kara Mustafa often came to rest there, and he had made the tower of St. Ulrich's church near the battlefield his observation post. A mosaic depicting an Ottoman tent made by Walter Behrens in 1955, overlooks the carriage door of a social housing building at no. 43 Neustiftgasse Street. 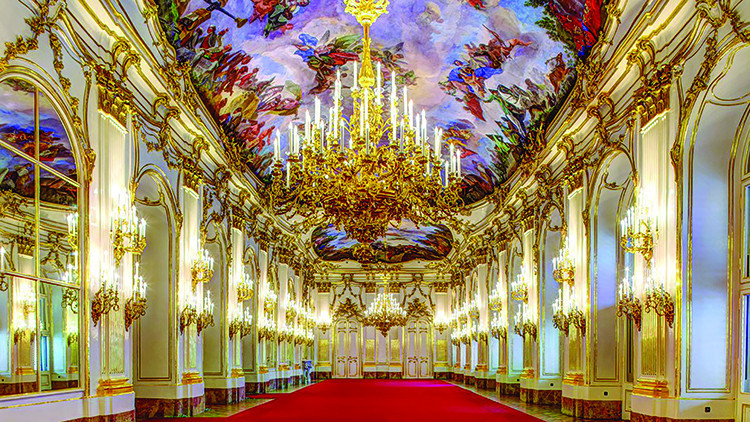